“Electric Vehicles” is an umbrella term, and a wide one. They come in a range of different types, from various manufacturers and in a number of models. These “types” also run on different amounts of electric power, with some interchanging between other sources of fuel that offer different speeds, environmental impact and more.

Electric Vehicles, or “EVs” can be broken down into:

Below, we explain the different types in more detail: 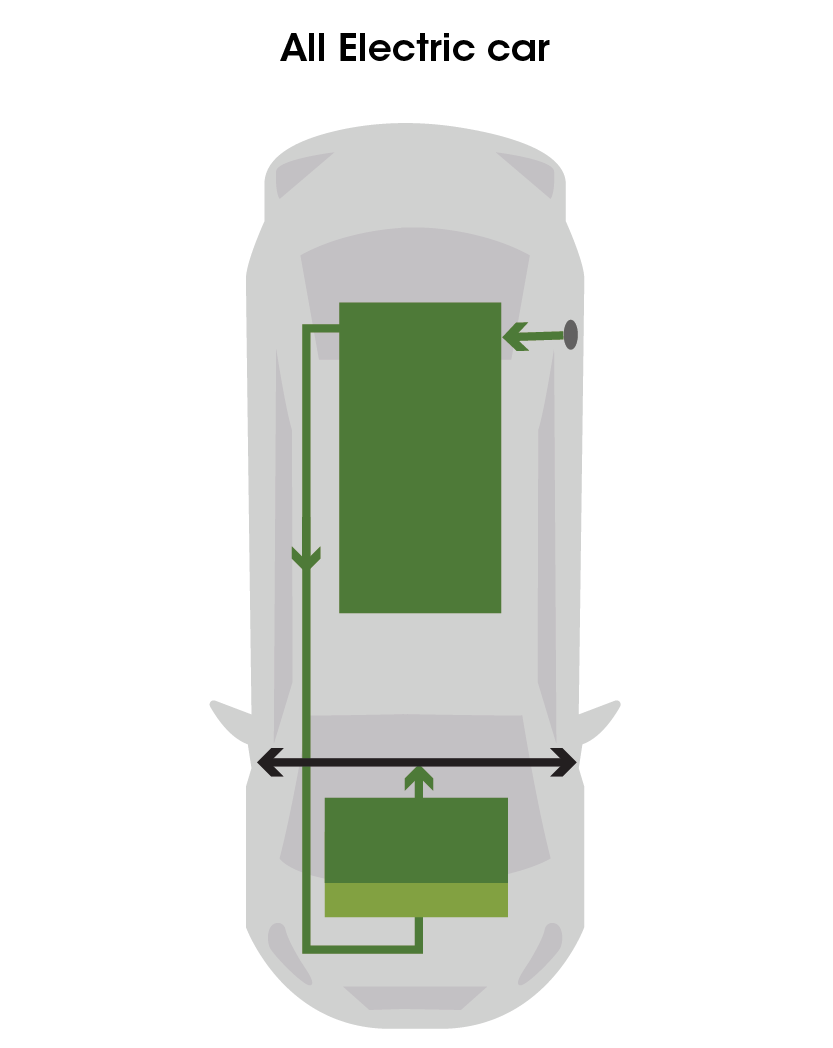 What is a battery electric vehicle (BEV)?

When the vehicle is slowing down, the motor is put into reverse to slow the vehicle down, acting as a mini-generator to top-up the battery. Known as “regenerative braking”, this can add 10 miles or more to the range of the vehicle and the average range is increasing.

As 100% electric vehicles rely entirely on electricity for fuel, they do not produce any tailpipe emissions. At present, some of these vehicles on the market typically offer a range of around 100 miles, though many offer more.

Pros: Zero-emissions running; far quieter on the road; much cheaper to refuel; EVs with a list price below £40,000 are exempt from road tax and the London Congestion Charge.  Servicing costs generally lower than an internal combustion engine (ICE). 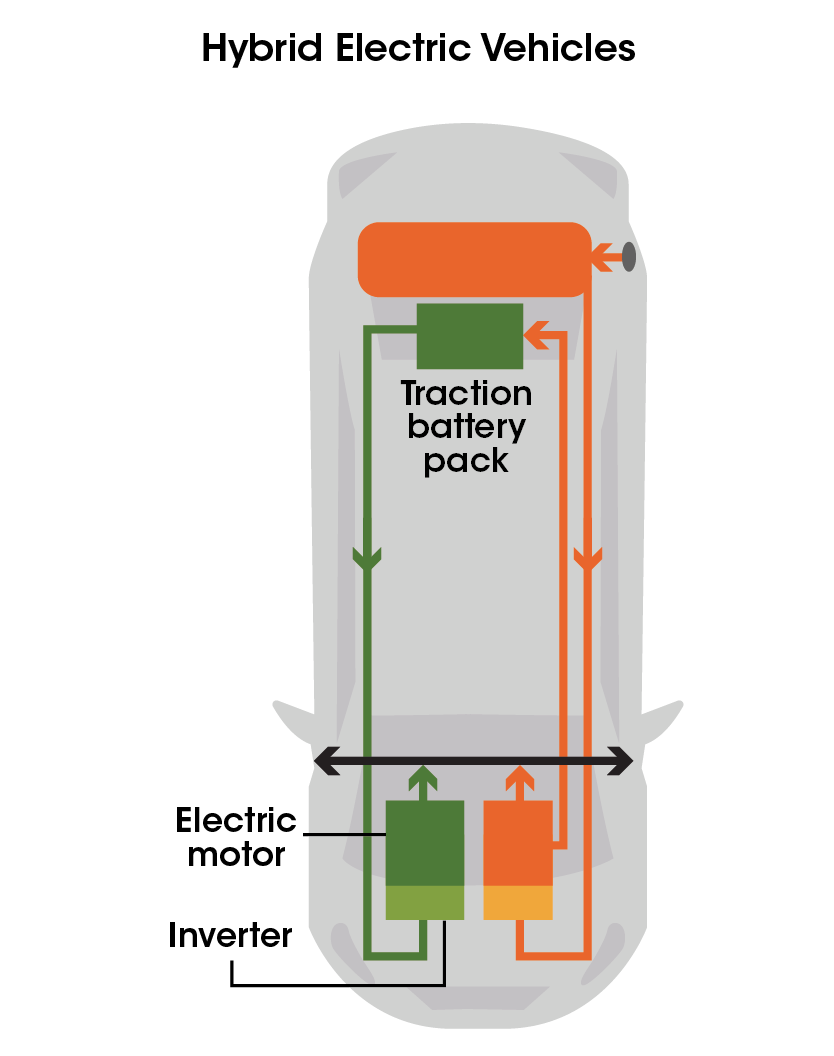 What is a hybrid?

A hybrid car combines a conventional petrol or diesel engine with an electric motor and batteries. Although not as ‘green’ as fully electric cars, hybrids generally consume less fuel and produce less CO2 than conventionally powered cars.

The most common type is the parallel hybrid, sometimes known as a self-charging hybrid. The engine is still the main power source, but the wheels can be powered in three different ways: either directly by the engine, by the electric motor alone, or by both working together. You never need to charge these hybrids. Most can run on electric power only for just a few miles at low speeds.

Pros: Full hybrids are really economical for stop-start city driving, because the electric motor gets the most use and the regenerative braking boosts the batteries whenever you decelerate or use the brakes.  We are seeing the introduction of more mild hybrids, many with a 48V battery that supports the vehicle systems but doesn’t drive the wheels.

Cons: Fuel economy tends to reduce out of town, because the batteries make the car heavier and the electric motor will soon run out of charge at higher speeds and under hard acceleration. 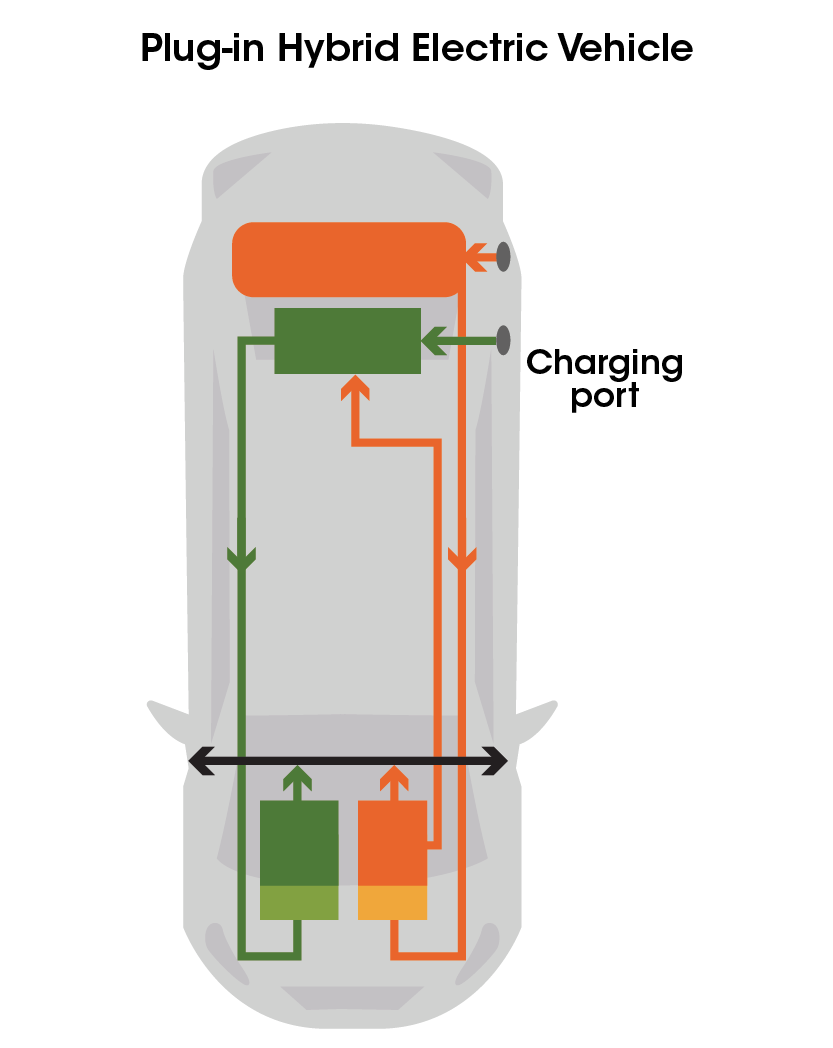 What is a plug-in hybrid electric vehicle (PHEV)?

As the name implies, for this type of hybrid the primary power is from an Internal Combustion Engine (ICE) but it can also be plugged into an electric outlet to recharge its batteries, and is likely to have regenerative capability as well.

In effect, it’s a halfway house between a parallel hybrid and a full electric vehicle. Although it has a conventional engine, it also has larger batteries than a parallel hybrid and can drive for longer distances and at much higher speeds on electric power alone – typically up to 30 miles but increasing and at least 70mph in some cases.

Pros: Has a longer range than an electric car; cheap to use for short, urban journeys that don’t deplete the batteries.

Cons: Batteries add weight, making fuel economy poor on motorway runs once the batteries are depleted; need to recharge batteries more often than a pure EV, which will have a longer range; need to plug in to properly charge, unlike parallel hybrids.  Two forms of drivetrain to maintain results in higher servicing costs than a single drivetrain.

What is an Extended Range EV?

Extended-range electric vehicles have a plug-in battery pack and electric motor, as well as an internal combustion engine.

The difference from a plug-in hybrid is that the electric motor always drives the wheels, with the internal combustion engine acting as a generator to recharge the battery when it is depleted.

Range extenders currently have a pure electric range of up to 125 miles. This typically results in tailpipe emissions of less than 20g/km CO2.

Pros: Range extenders are BEVs with a small petrol-powered generator on board, which cuts in to charge the battery when it runs low. These typically offer a longer battery range than a PHEV, so it’s easier for drivers to cover most mileage using only electricity.

Cons: Real-world economy is maximised by using it mostly in electric mode. As the focus of an E-REV is the electric drivetrain, the fuel tank is typically small – so stops are more frequent than a PHEV on long trips. Range-extenders do not work relative to vehicle speed, so they can rev relatively hard even when travelling slowly.

What is a hydrogen fuel cell vehicle?

While conventional electric car sales are starting to boom, behind the scenes many manufacturers are quietly working away on another way of running a car – hydrogen fuel-cell technology. Hydrogen fuel cell vehicles, also known as Fuel Cell Electric Vehicles (FCEVs), are another type of electric car and have a fuel cell stack which uses hydrogen to produce electricity which then powers the wheels of the vehicle. There is no internal combustion engine in a FCEV. The fuel cell is an electrochemical device similar to a battery, but unlike a battery it does not need recharging and will continue to generate power as long as it is fed with a supply of hydrogen. Fuel cells produce electricity and heat with just water produced at the tailpipe.

Unlike battery-powered vehicles, hydrogen fuel cell vehicles are refuelled at a filling station in a similar way to vehicles with a petrol or diesel engine. The FCEVs on the market have a range of around 300 miles. They take just three to five minutes to refuel and an initial network of 12 hydrogen filling stations is being developed in the UK to support their roll out.

Pros: Fuel cell vehicles produce their own electricity using a chemical reaction, which is used to drive the car. These take a few minutes to refuel, offer hundreds of miles of range and emit only water vapour from the tailpipe. Hydrogen is an abundant fuel which can be produced using renewable energy.

Cons: Hydrogen fuel cells are already an established technology, but this is a relatively new sector for the automotive industry. As such, there are only a handful of hydrogen stations which are expensive to build and currently only two relatively expensive vehicles are available in the UK. There’s an influx of investment and new models on the way, though.

Stay tuned for part 4 next week, where we will be looking at electric vehicle batteries.